Let Me Hold Them For You My warrior princess had been going through a period where the warrior was very much in evidence.  Her rages were a terrible thing to behold.  She would yell, stomp, knock things down and throw things.  If someone was too close, it was certainly within the realm of possibility that she would hit or kick.

And I was mad.  Mad at this tiny little girl whose feelings were so, so much bigger than she was.  Mad because she was adding a burden that I didn’t want to bear.  I resented interrupting other activities whenever she got upset to help her calm down and make sure that she didn’t hurt someone or something.  Each outburst added a few more pounds to my load of mommy guilt as I fought to hold on to patience, peace and self control, and often dropped the ball.

Could we have punished or ignored it out of her?  I asked myself that several times.  Honesty compelled me to admit, though, that all punishment would have accomplished is to turn that fearsome rage inward, and the thought of that seething inside of her was far worse than dealing with the outward expressions.

“Use your words.”  Except words don’t matter to this one they way they do to her older sister and me.  This mighty girl has always been a tornado. Walking earlier than any of her siblings, always jumping, always running, perpetual motion, breath-taking hugs, bouncing from delight, shuddering under sadness–her language has always been more physical than verbal.
“I don’t love you.  And (her voice caught here) I don’t love God.”  Oooow.  Words aren’t the release for her that they are to me, but she knew how to use them to kick my mama gut."

What do you do when the weight of big emotions is too strong for your little one, and you are cracking under the load of mommy guilt?

What if "use your words" doesn't work for your child whose language is much more physical than verbal?

What does it look like to bear one anothers' burdens?

I am over at A Deeper Story today sharing how my mighty girl and I are learning together.  Come join us!

Her eyes are blank and there is a pool of blood spreading around her face on the floor.  I wake up wanting to vomit and check her Facebook page repeatedly until I see a post.  The relief is incomplete because she and I both know that one day it might not be a dream.  Her children's faces--so close in ages to mine--rise in my heart, and I pray.

Something in her voice was off.  "Well, it couldn't really be rape.  After all, they were married.  She knew when she married him that sex was part of it."  It seemed like we were discussing a newspaper case at the time.  But years later I can still remember the oddness in her voice and I wonder.

It's the kids, you see.  She can protect them just a bit right now, deflect his rages, and watch that he doesn't go too far with them.  If she left, who would be there to get between them?

"God hates divorce."  Heaviness and resignation in her voice, she asks what the church congregation would think if the pastor's wife left.  "It would be like a slap in the face to God.  I just need to be more submissive and try harder.  If I can just praise and affirm him more, and show him that I respect him...men need that, you know..."

Everyone else at the table shifts uncomfortably at his "joke" that is yet another jab at her.  She doesn't seem to notice and gets up to refill his drink again.

Enthusiasm dies down to quiet disappointment.  "Oh, I would love to!  But I better not.  He wouldn't like it."  In her world, it is clear that activities--everything--must be planned around whether or not he likes it, even if it doesn't affect him in any way.  It's second nature to her to try to placate him, but even after all these years she doesn't seem to see that it is a constantly moving target.  He will always, always find something else to be upset about, another way to control her.  Her life revolves around trying to make him happy.

I take a deep breath and quietly say, "This is abuse.  The way he treats you isn't right."  For a moment, her eyes flash with fear, anger, surprise, relief, uncertainty and thankfulness.  I'm not sure which will win out.  Then she smiles and brushes it off.  "You're exaggerating.  It isn't abuse.  He would never hit me.  He just...well, I think sometimes he didn't get enough nurturing as a kid and is still hurting."

He controls the money.  He controls everything.  She scrapes to find ways to stretch what he gives her to pay for the doctors visits and new shoes for the kids.  She puts off the doctor or dentist visit for herself again, forgoes the new shoes that she needs.  He goes out to eat and gets a new computer.  "Well, but the money is really his, you know.  He is the one who works.  I'm just home with the kids." (She works more in a day than he does in a week, but he is still "too tired" to help with the kids when he gets home.  He "needs to unwind", even though she hasn't had a break in weeks.  So he spends another night playing videogames.)

They tried counseling.  Well, she tried and he went along.  It didn't help.  The church counselor told her to affirm him more and build him up more.  Praise him a lot.  He said all the right things. Showed enough regret for his mistakes (although he was always a little vague on the details).  She really was a bit messed up from her family issues, you know (whispered confidentially.)  Eventually, they stop going.  The cycle hasn't really changed, but he has some new words to use against her now.  He even tries to convince her that she is the abusive one, especially if she has ever fought back.

Once your eyes are opened, it is hard to unsee things.  I watch her pain, helpless and desperate for her to wake up (but if she did, how much better would that be?  Sure, it is easy for me to yell, "Leave him!"  For her to do that, especially with children involved, is no small feat.)   I do my best to be a safe friend and pray desperately for angels to protect her.  Wincing at the telling comments she doesn't even notice about how she is trying to avoid upsetting him, I try to balance truth and love with the fear of driving her away.  I watch and pray.

I really think there is an abusers' handbook somewhere, because I have known so many women in abusive relationships, and most of these could apply to every one of them (if you know me in real life and are trying to guess who these stories are about, don't.  Just know that they could be any woman).  If you see yourself in here, please know that you matter.  You are not crazy, you are not blowing it out of proportion, it is not your fault.  Read Why Does He Do That: Inside the Mind of Angry and Controlling Men by Lundy Bancroft.  Read my friend Hope's blog about leaving her abusive husband and finding healing.  Talk to a domestic violence counselor.  Freedom and healing really are possible.


Related posts: Sex Ed in a Christian Home: Abusive Relationships
A Letter to My Divorced Friends

You Are Not a Failure

This isn't what I thought it would look like.  When I imagined my life with children before actually having kids, I expected it to look more polished and less challenging.  I thought it would be easier.  Not the physical stuff--I was fine with lack of sleep and changing diapers and dealing with tummy bugs and all that.  But this emotional work of being a parent?  It's hard, y'all.  As Shrek would say, there are so many layers.  And we are definitely talking onions instead of parfaits.

This has been a challenging last few months, and I am so, so glad that it didn't happen earlier in our parenting journey.  When we first made the transition to gentle parenting, I was still looking for guarantees.  You know--if you breastfeed, your kids won't have allergies or get sick.  If you parent gently, your kids will always be gentle and compassionate and well-behaved because they will always want to follow your instructions.  If you do this, if you do that, if you check all the Good Parenting boxes, if you follow this manual...  I never would have said that, of course.  I would have told you that just because certain outcomes are more likely doesn't mean that it will happen in every case.  Deep down, though, the residue of growing up a Gothardite means that it is my default programming to believe that if I just try harder and do it right, then everything will be perfect.

Of course, that means that when it doesn't turn out that way, I start to panic.  It is all my fault!  If only I had done this.  Maybe I was wrong about that.  I should have tried harder and been more consistent and...

Those thoughts are tricky little zombies.  Reeking death and decay, and ready to suck out our brains.  No matter how many times I try to kill them, they seem to rise again.


Honestly, I haven't yet figured out how to keep them from coming back.  The best I can do is resist the deadly lies.  Because the truth is, I don't think I can try harder right now, and I am starting to believe--really believe--that I am not supposed to.  I am not a failure.  Neither are you. 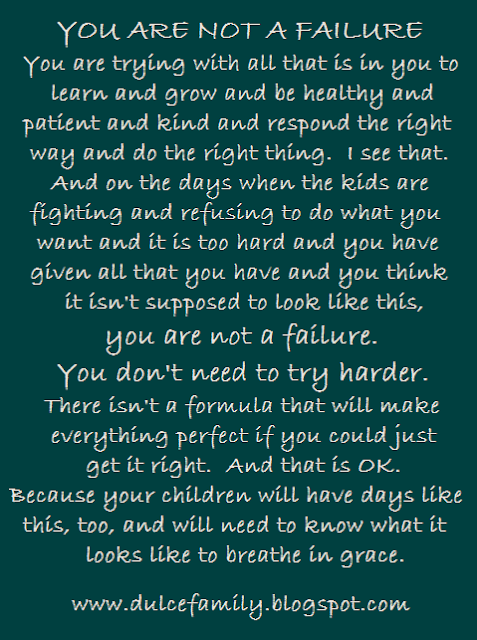 As messy as this life looks some days, there is still beauty in it.  There is love.  There is growth.  It gets better.  You aren't meant to do it all.  You wouldn't put a crushing weight on your children and tell them not to ask for help--show them what it looks like to allow others the blessing of helping your family.  Most of all, know that these days come to everyone in real life.  You can listen to the zombies, or show your children how to fight the lying, shaming soul suckers.

You are lovely.  You are.  Your children have God's fingerprints all over them, even if you have to look hard to see them.  Breathe and let grace wash over you and refresh your spirit.