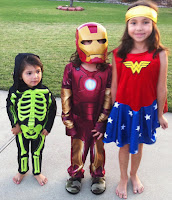 My little sweetlings love playing super heroes.  They race around making appropriate noises for all of their pretend super powers--beeps, whirs, laser sounds, flying webs--and in their imaginations, they are capable of anything.

It turns out that my mutant gifted children do have amazing powers that I never imagined before becoming a mom.  Sadly, these powers are not always used for good.  I will refrain from labeling my own kidlets villains, but here are a few of their not-so-super powers:

I love and accept my children for who they are.  I am a little concerned that their super powers so often seem to be used for nefarious purposes.  But there is one more ability that is always used for good: they give the most powerful, loving and healing hugs in any universe.  What amazing abilities do your little ones possess?
Posted by dulce de leche at 9:55 AM

Email ThisBlogThis!Share to TwitterShare to FacebookShare to Pinterest
Labels: parenting

Lol, love this because it's soooo true! And great minds really do think alike...just yesterday I wrote about Captain America and Stan Lee in a literacy-superpower related post!

I will never forget our son at 3, who is now 33, putting me in a web like Spiderman, when I told him it was nap time. He was so seriously funny. I fell into his pretend web and struggled to get out, and then declared it was nap time again. He happily went to his bed. Just a few seconds of powerful joy was all it took. :) I wonder how he would have felt if I had not played with him and his pretend web and just rushed him to his nap?
I just love kids. :)

My friend once said that her kids can hear an erection. It must be true... no matter how deeply asleep they appear, they can always wake up to try and prevent a sibling.

So funny!! We do lots of superhero play here too, last week my five year old dressed as super why to visit Ikea...my four year old can make chocolate disappear in a flash! Awesome post!!

This gave me a good laugh. I love it.
Unfortunately, my boys mostly try to act out their superhero fantasies on each other - each claiming the other to be a villian and therefore in need of a sound thrashing. *sigh*