Cuddle Leche for the Soul

I am over at A Deeper Family today, sharing about cuddle-leche and how it helps to quiet my soul.  Come on over and check out the other posts while you are there!  I am so honored to be a part of this incredible team of writers.
Posted by dulce de leche at 1:37 PM No comments:

10 Commandments for Parents: Forsaking All Others

OK, with all of the other commandments it is easy to see how they can be specifically applied to parenting, but the one against adultery stumped me for awhile.  I really don't want to get into anything icky, although the creepiness of father-daughter patriarchy teachings is worth noting.  But I believe that adultery is about more than sex--it is about breaking covenant and giving someone else a place that doesn't belong to them.  It is choosing someone else over your spouse.  In that context, there are some important parallels with parenting.

The parents that I know love their children dearly and value their relationships with their kids.  Yet it is so easy fall into the temptation of allowing our desire to please other adults to edge out our covenant to our kids.

Why is it assumed that we should always side with any adult against our children if there is a conflict?

When our children are born, most of us are filled with tenderness and compassion for them.  We want to meet their needs, even if it means sacrifice.  I don't know of any parents who enjoyed letting their babies cry it out.  Most of them tell me that their own heart was sobbing right along with their little one.  But they listened to someone else who led their heart to be hardened against their baby.  Others faced similar situations with weaning, circumcision, vaccination and other issues.

Samuel Martin has done some interesting research and found that many mothers have a heart that was inclined to gentle discipline, and that they felt uneasy or distressed at the thought of spanking their children. Ultimately, if they did go on to spank, it was often because of pressure from others, whether family, friends, church or society in general.

What parent of a toddler hasn't been in a public situation where the child is having a meltdown and we feel temptation to parent for the crowd?  Recently a missionary friend was visiting, and described a church service where she was on the platform with the eyes of the entire congregation trained on her.  Just at that moment, her three year old began to act...well, three.   She could see the expectations on some of the faces to punish him into relative quietness (my snort here--like you can really punish a three year old into being quiet!  The ones I have seen typically get louder).  Instead, she smiled and took him in her arms and comforted him.  She politely expressed to the congregation, "My first ministry is always to my family."

It is hard for some parents to choose between their children and protecting their image of a perfect family.  I have seen some of my dear friends be rejected by their families in favor of their abusers once they decided to get out of their marriage.  Some of those parents were seduced by the manipulation of the abuser or bribed with promises of more access to their grandchildren.  Other friends were abandoned by their families when they came out.  All of those parents broke their covenant to their children because they placed a higher priority on their own rightness.

Marriage vows are pretty well defined, but we don't have the same ceremony when we become parents.  Honestly, though--shouldn't our commitment to the our vulnerable, helpless children who are a part of our family because of our own choices entail just as much love, and promises of faithfulness, to cherish them?  And shouldn't our responsibility to them come before our choice to please people outside of our family?

It is difficult to forsake the parenting book gurus, the callous opinions of preachers, doctors, friends and more to be faithful to our own hearts.  But it is still worth doing.  As a daughter, grand daughter and daughter in law of pastors, I echo my friend Femke.  Our commitment should always be to our family over pleasing anyone else.  As Eli learned, very little matters if you haven't been able to reach your own children.  There will always be judgmental stares and disapproving sniffs over our parenting.  Our covenant is to our families, and our choice should always be for them.
Posted by dulce de leche at 1:04 PM 2 comments:

Email ThisBlogThis!Share to TwitterShare to FacebookShare to Pinterest
Labels: 10 commandments for parents 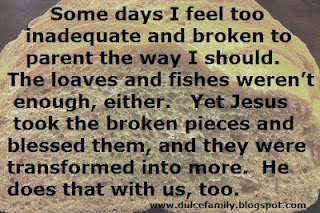 Sunday mornings are probably the most ungodly times of the week for many Christian families.  It's sad, but true.  Church is stressful when you have kids.  Regardless of how organized you are, something will come up to cause things to take longer than they should.  Somebody dawdles.  Somebody else can't find what they want to wear.  Another somebody snaps at someone else.  A couple of somebodies need to have their hair fixed, again, and you don't have time.  Breakfast was rushed or unsatisfactory or they weren't hungry, which practically guarantees a meltdown from empty little tummies in a couple of hours.

Impatience, squabbling, irritability, frustration.  By the time we walk in the door, few of us feel focused on God.

Then it gets worse.  Little ones start squirming and making noise, expressing needs at inconvenient times and in inconvenient ways.  You feel eyes boring into the back of your head, whisper angrily as your face heats up and then finally march out into the hall way, clutching just a bit too tightly at the small hand in yours.

Anger, pride, fear and crushing guilt at the hypocrisy of it all.  Discouragement at another seemingly wasted morning when you are trying so hard to do the right thing.  "Is it even worth it to try to go to church at all?"

Breathe.  Let His peace, comfort, mercy and forgiveness wash your soul.  Soak in His patience and remember.  God is glorified in the love and grace you show your family. Your ministry is in how you treat "the least of these," not in how well you meet other people's expectations of a Christian family.

I don't know what Sunday mornings will look like in your family.  Maybe God will lead you to a different church, or to a different worship time, or just to a different way of approaching it all.  But church isn't meant to be a burden.  I am confident that what Jesus really wants is to refresh our spirits and shower us with mercy and grace, to join in the celebration of redemption with us, and to help our little ones see what His love, His family is all about.
Posted by dulce de leche at 5:48 AM 4 comments:

What Would the Neighbours Think?

Welcome to the second edition of the "I'm a Natural Parent - BUT..." Carnival

This post was written for inclusion in the carnival hosted by The Artful Mama and our feminist {play}school. During this carnival our participants have focused on how mainstream society has affected their natural parenting and how they have come to peace with this.

I'm not so sure a "natural" parent is my title...more like "gentleish" parent. I have two little boys whom are my focus right now, although my almost 3 year old would swear he is an only child...as he is the majority holder of my attentions these days. I'm not going to lie, people say it will get easier...but I just don't see it yet. And with the need for my help at every bodily function, it's challenging just to survive.

So here's my big confession.....ready....since May I've been letting my older son pee outside in our backyard. It's the only way he will go on his own and seriously, with a baby in my arms I need him just to do this. We actually didn't think it was such a big deal until my mother-in-law came to town and was mortified the first time he did it. "what will the neighbors think, he's going to think its "normal" behaviour, that's just plain rude!" rang in my ears. Then I started thinking maybe she was right; and it's too late now...what am I going to do? *laughs*** It's not like he will do it forever....will he? I'm sure once the cold weather hits all will right itself in our world. But until then...what will the neighbours think?


Teresa Goldstein is a self professed "gentle-ish" parent of two boys; who spends the majority of her time laughing, loving and living the daily high jinx life has to offer. 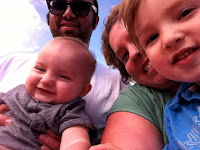 ***
This post made me laugh!  I, too, have a son who takes advantage of his male anatomy to urinate in unusual places.  For awhile he loved to use a large cup or bottle, and for a few weeks he would try to time things so that someone else was using the toilet and he could then use the shower.  Now that he is a little older, he is much more conventional, but I have no intentions of mentioning this post to him lest it give him ideas!  Thank you for letting me host this, Teresa!  :)

This carnival was created by The Artful Mama and Natural Parents Network. We recognize that "natural parenting" means different things to different families, and we are dedicated to providing a safe place for all families, regardless of where they are in their parenting journeys.

Please take time to read the submissions by the other carnival participants: