How I Lost My Voice, and Got it Back ~ Anonymous Post (Sensitive)

It started innocuously enough.  I loved to read, and my favorite heroes were self-reliant and uncomplaining, even in the face of adversity and mistreatment.

There was a universal scorn against tattling among my friends.

My exasperated mother told me over and over to stop trying to justify my actions and accept just punishment and show contrition. I was six.

He was a wealthy professional.  My eyes wide at his luxurious home, I also noticed that my parents were extra-polite to him.  They respected him for his knowledge, experience and reputation.

I was frozen with shame as he pulled down my underwear.  I looked at the ceiling and tried to convince myself to believe his lies as he touched me.  I was eight.

I didn't want to say anything.  Trying to get the right tone of voice and not sure if I should be casual or outraged, I told my parents what had happened.

My mom was upset.  My dad was uncomfortable.  There were some careful questions as to exactly what had taken place.  They argued.  And then...nothing.  It was ignored.  No police report, no confrontation with him, not even the trouble to keep me from being alone with him again.

Each time, I held my breath, afraid he would try again.  The nightmares were always connected to his place, though never to his act.  I was afraid to go to sleep.  Months passed, and just when I started to think it would never happen again, it did.

The second time, I didn't bring it up.  I was nine.

Deep in the patriarchy/courtship movement, there was an agreement:  I would keep my heart and body pure, and following the tenets of courtship would keep me safe.  Going through my father would mean that I was respected and valued.

Brushing my arm.  My shoulder.  A squeeze.  Always little things, but always finding a way to touch me.  I squirmed, blushed and ignored it.  Finally, after weeks, I went to my dad and told him, feeling awkward beyond words.  I had a suspicion as to his response, but this was only a teenage guy.  Maybe it would be different?  I had to force out the words, asking if he would tell him to back off and stop touching me.  I could see the humiliation in my dad's face at the idea as he asked how important it was.  And I mumbled "not very," because it clearly wasn't.  I was fourteen.

His pastor praised him as the most upstanding young man in his whole youth group, one who was committed to sexual purity and had a heart that was devoted to God.  The first time I met the guy, we were crowded into the back seat of a carload of people.  Of course he was pressing against me--there wasn't any room.  Except later that afternoon, there was plenty of room, and he stood behind me and began to rub my butt.  I was mortified, and took a second before I could work up the courage to move away.  I knew better than to bring it up to anyone else, but I wrote him a letter expressing how much it bothered me.  He responded with a very nice apology.  We wound up spending quite a bit of time together and he was always very respectful and polite, and never again initiated any physical contact.  I was sixteen.

I was working a volunteer position with an international company.  Every single time I or any of my female coworkers passed a particular employee, he would make lewd suggestions in reference to our jobs.  I rolled my eyes and ignored it, but a friend insisted that we needed to file a report, if not just for ourselves then out of consideration of the repercussions if he were to repeat that to a woman from another country that was doing business with us.  We reported his behavior.  The supervisors were horrified by his comments and took it very seriously.  They never once dismissed or minimized his behavior, or our discomfort with his harassment.  I was twenty one.

I had a little girl, and I realized that I would always fight to protect her, and that if she ever, ever came to me, I would believe her and do everything I possibly could to keep her safe.  I was twenty nine.

For the last nine years, I have immersed myself in the world of gentle parenting, and LR Knost's books represent some of the best info I have ever found.  The Gentle Parent: Positive, Practical, Effective Discipline not only covers the background of why gentle parenting is so important for healthy families, but it also includes the how.  How do you make this work?  What does it look like in a busy family with several kidlets and many needs? 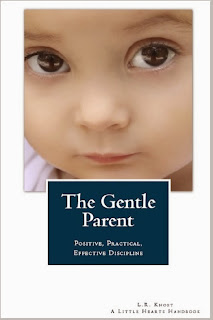 One final note--as a Jesus-lover, my parenting and my faith are very much intertwined.  Although this book is not religious in tone, I know that this also reflects the author's deep relationship with God and the love that fills their home.  I highly recommend her posts on Christian parenting and her interview with Gentle Christian Mothers.

So how can you get it?  It is available on Amazon and from the Little Hearts Books website, and for international mamas who don't want to pay that much shipping there is also an Etsy shop.  Best of all, you have a chance to get it for FREE!  As part of the celebration for reaching 3,000 Facebook friends this week, we are offering a free copy of The Gentle Parent: Positive, Practical, Effective Discipline.  To enter, just leave a comment on this blog post with your email address by 11:00PM CST on Sunday, November 17, 2013.  One winner will be chosen randomly.

Also, be sure and check out the Little Hearts blog and Facebook pages.  I have been blessed with access to a ton of wonderful parenting pages and I simply don't have time to stay caught up on all of them, but this is one I never want to miss because it ALWAYS refreshes my spirit.
Posted by dulce de leche at 10:42 AM 20 comments: